As many of you know, I share quotes from other philosophies and religions, including Buddhist ones.  I was asked about why I do that especially given that this blog and so much of what I’ve shared is about my journey through Christianity to Christ…. so since I get that question asked often I decided to share a recent response here.

My response is below….

As for the Buddha quotes and Buddhism… there is a great amount of wisdom that is spoken and shared in Buddhism as there is in many various teachings and writings we’ve had throughout history.  I think that often times most people look more to the identity or identifying with the “messenger” than the message …. the “flesh” of it rather than the Spirit… and discount a lot of things that directs us back to that which is within us… to what it is that is written in our own hearts and on our own minds…. and living according to that which is within us.

One of the things that I was taught by God is just as Jesus said… that it is God that knows what each has need of before they ask and does provide it.  As I know that God can speak and reveal things to people through various means…. as we see illustrated in the bible… some through talking donkey’s, some through burning bushes, some through angels, or dreams, visions, etc….. that when we understand that…. there isn’t any way to discount what ever means that the Spirit sees fit to lead a person or give to them whatever it is that they have need of….

Have you ever studied any of the words that are recorded to have been spoken by Buddha?  Do you know that as with Jesus, he never penned anything directly himself… what we have of his words are the same as with Jesus.. what others heard and seen and wrote down to preserve for others to read and know.

From my early childhood that has been the way of living for me…. so even though during my time in “Christianity” and seeing so much of what was said there was not put into practice and was actually against so many of the teachings, it is was also that I found the same to be true of Buddhism, Hinduism, and just about every other religion or philosophy as well.

That as with Christianity, most turn from it and don’t want any part of it over what someone else has said about it… or claimed to be part of it and their actions… not as a result of knowing first hand what the teachings are… and what it is that the “teacher” of them has said or did…. but more so about what the actions of those are that claim to be “followers” of the religion or philosophy.

So I have a lot of friends that call themselves Buddhist, Muslim, Hindu, Wiccan, Pagan, Atheist, Agnostic, Christian, as well as “none of the above”.  It is “labels” that are taken unto themselves… that people call themselves by… … but as with anything else… one cannot know for sure whether or not one is “bearing fruit” of those religions or philosophies until one knows for himself/herself what the various teachings themselves  are, if they are interested in them or if a person is a follower of them. When one does…. the person calling himself one, will expose themselves as either a “follower” or not, thus no judgement of the person will be necessary. Another amazing teaching of Jesus Christ as well.

Not only are we known by our fruits… so is everyone else… and we don’t have to judge them…. for it will be the words of the “teacher” or instructions given in the various religion or philosophy, that will reveal who it is that is a “follower” and who isn’t… the key though is that we have to know what each teacher, has said, taught and what those instructions are to know.  We can’t be hearing it second-hand… nor can we be discounting it without knowing what the “teacher” has said or instructed to be “followed” or the “discipline” of the religion or philosophy!

What is the problem in most cases is that most are taking what an “apple” is from another… rather than from the words of the very ones that are claiming to be followed.. and therefore a lot of deception is going on… when you know what an apple is… and you see one… the apple doesn’t need to tell you its an apple…. it won’t need to be claiming anything… and the same is with each of us as well.

We don’t have to make any claims as was Jesus’ example… we know them by what it is that is produced from within themselves …as they will know us as well…. and no claims with mouth or words are necessary….  when the heart is where it should be… the rest takes care of itself!!

So again… thanks for your comments.. and share with me whatever it is that you feel lead to share with me.  Tell me your experiences if you’ve had any with Buddhism as well…  As Jesus taught, God knows what each has need of before one asks… and if our trust is in God totally and completely for our own lives then it will be there also for the lives of everyone else….also!  Right?? 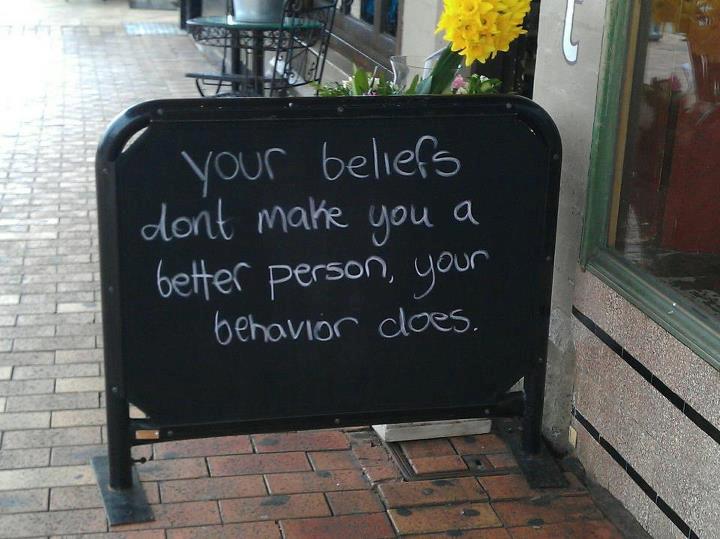